Xiaomi has announced that they have a system that can charge a 4000mAh battery in 17 minutes. At 100W*.

I’m half excited and half afraid. I’d also like to know what effect it has on battery longevity. 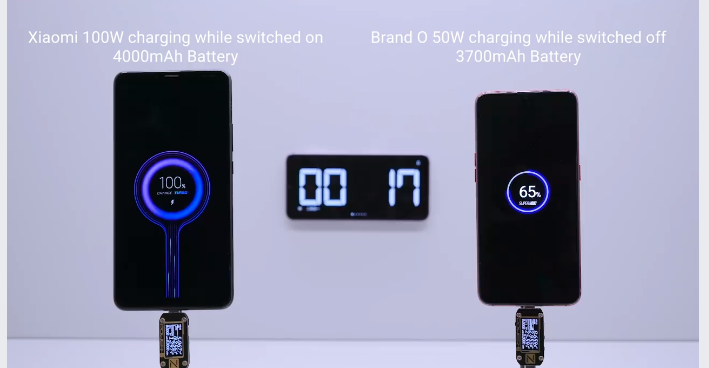 The video shows a charging race between two phones, Xiaomi’s unnamed “100W” prototype and a phone with “50W” charging from “Brand O”, which looks like it’s an Oppo RX17 Pro. I put both of these wattage ratings in quotations because neither phone actually hits its rated charging speed. Xiaomi’s video shows a live, in-line power reading, and the “100W” charging shows a sustained ~80W (18V / 4.5A) from about 5-30 percent, with a peak of 88W. The competing 50W Oppo quick-charge solution caps out at around 40W.

Unfortunately, Xiaomi didn’t offer any specifics on how its charging solution works. Dissipating heat, which slows charging and degrades the life of a battery, is a major concern when charging this quickly. Oppo’s charging solution (branded “Super VOOC” in Oppo phones and just “Fast Charge” in OnePlus phones) solves this issue by duplicating the heat-generating power management circuitry inside its proprietary power brick.